Specially designed for the National Curriculum Key Stage 2,  our wonderful and stimulating educational sessions looking at life in the Stone Age, Bronze and Iron Ages, from the Palæolithic through to the coming of the Romans.  We encourage children to come dressed up! 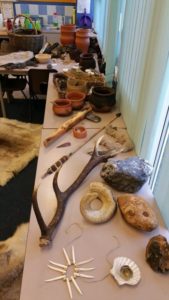 You will meet 2 Stone Age people in the classroom, from two rival tribes, in period clothing, with painted faces, objects, tools and weaponry. The children are split into tribes, and have face paints applied to be ‘dire wolves’, ‘sabre-toothed tigers’, ‘woolly mammoths’ or ‘cave bears’.

We start our study with the concepts of language and communication – how did people communicate? We’ll discuss emotions, gestures, noises, art resources.

We’ll introduce pupils to the concept of life in a cave and roundhouse, with a central hearth. We show how fire was made. What was the most important stone used for making tools? Children will get the chance to handle furs and hides, antlers, and flints, see how tools evolved, and find out what Stone Age people wore.

How did our ancestors make shelters and early round houses? We’ll build a wall out of sticks to demonstrate. This can be done outside if the weather permits: it takes a bit of planning and extra resources so please ask for details. We can even build a small roundhouse for extra wow factor!    [needs an extra day, please ask for details and cost].

A hunt for food is acted out so that your class can understand tracking, trails, pits traps and snares, the use of spears, bows and arrows and fishing tridents.

Then we move onto the Copper and Bronze Age.

Our two Bronze Age characters add elements of clothing to their stone age dress, incorporating new technology such as weaving to show development. Ores are examined: copper, tin and bronze tools and weaponry, and miscellaneous objects are examined and discussed.

Our presentation examines what bronze is, how  it is made, where it came from, and what it can be used for.

We introduce life in a roundhouse, with a central hearth, one door, and no windows! (above: Cooking in the roundhouse)

Children get the chance to spin wool using a drop spindle, and to use a primitive weaving loom. They will understand about the clothing and materials available at the time, learning strange new things!

We discuss the origins of farming and the domestication of animals, the continued importance of hunting, and the use of flint, as well as bronze and copper tools.

Then to finish off the day, children meet the Queen of the Eceni tribe, Boudicca herself! Your pupils will get an understanding of the mindset of the native Britons – how they lived, fought, and died fighting against the Roman invader. Find out how iron revolutionised warfare, and paved the way for the modern world.

Suitable for Key Stage 2 – the achievements of the earliest civilizations 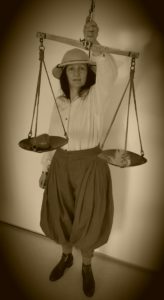 Our Egyptian day looks at life in Ancient Egypt through the magnifying glass of  Professor Clarissa Fflinders-Caltroppe, here weighing the heart and the feather of Ma’at.

She is an archaeologist and colleague of Howard Carter, and has a selection of ‘finds’ from her digs to show children.

Ancient Egypt was a fascinating, magical place and we look at the gods and goddesses that made up the Pantheon and belief structure.

We look at the history of Ancient Egypt and the dynasties of the Pharaohs, Upper and Lower Egypt, The Valley of the Kings, Pyramid design, cartouches and hieroglyphics, Champollion and the Rosetta Stone, Temples, Tutankhamun and Rameses II.

Our workshops explore the concept of archaeological practices with sandboxes, trowels, paintbrushes and data recording for the young Egyptologists in the class!

Suitable for Key Stage 2-the achievements of the earliest civilizations

Presented by Herodotus, the famous Greek Historian of the fifth century BC, our fascinating workshop explores:

Geography with a huge map of Ancient Greece nine feet square,  in chronological order we explore Crete, Thera, Sparta, Thrace, Athens, Macedonia, Troy – with children taking part in naming them – and understanding THERE IS NO GREECE!

History from the Bronze Age through to Alexander the Great, including study of Crete, Thera, The Olympic Games, the Polis, Philosophy.

Writing looking at the Greek alphabet. Children all have a pre-prepared worksheet with lots of questions to answer, and detective work, translating Greek characters into ‘English’.

Role-play with names provided so that every child can assume a Greek name for the day.

Gods and Monsters as we bring the Greek Pantheon down from Mount Olympus  into the classroom using high-quality masks. The stories of Perseus and Medusa, Theseus and the Minotaur, and Hercules’ twelve labours are all role-played with dressing up, masks and artefacts. 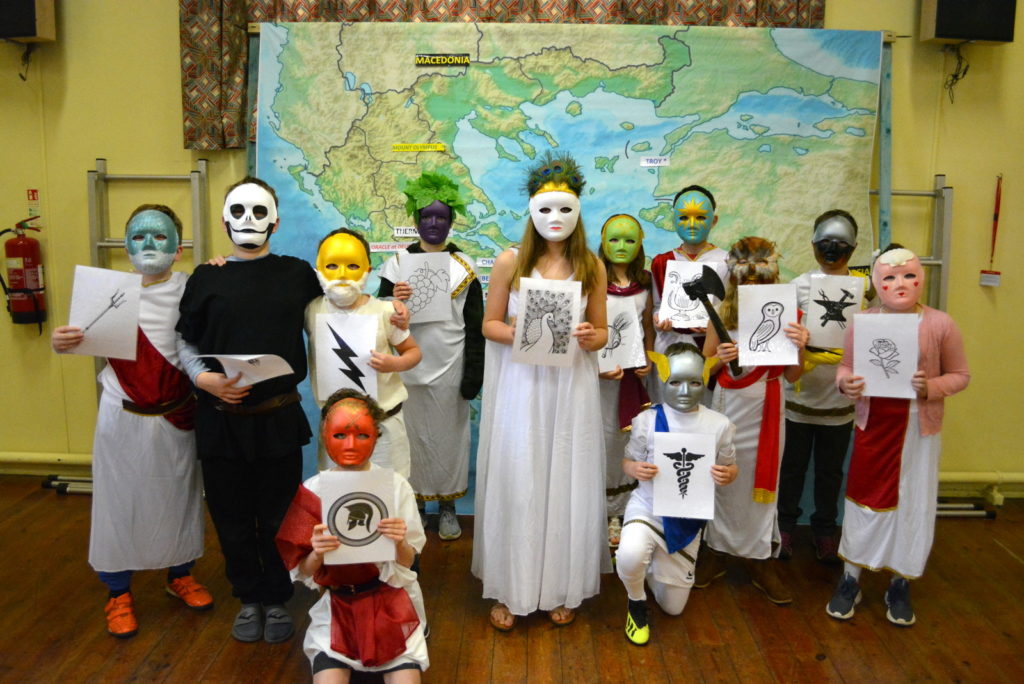 Greek Pantheon in the classroom

Science with our replica of the Archimedes Screw, the Eureka moment, and Pythagoras’s theorem – we draw a perfect right angle triangle on the hall floor in chalk using a piece of string and a cubit measure.

Warriors introducing the Hoplite and Spartan warrior, with discussions on Marathon and Thermopylae, Persians and the Peloponnesian wars.

Powerpoint to accompany the workshop, an informative powerpoint presentation. We will need a school laptop and AV projection.

The Romans and Boudicca

The Roman Empire and its impact on Britain. Suitable for Key Stage 2

Presented by Marcus Aurelius Dorsuo, a legionary from the XX legion based at Deva, and Queen Boudicca on the eve of the Eceni rebellion in AD60.

Typically  we deliver twin sessions, with each presenter setting up in their own classroom and students swapping between them to get an equal understanding of both cultures. With an assembly to start and plenary to finish with all students, if required.

Our historical educators arrive in full 1st century attire – a Roman legionary in armour, with weaponry, and a display of miscellaneous Roman items of the period; Boudicca with her flowing red hair looking every bit the Warrior Queen!

Marcus the legionary will teach the children a Roman greeting and hand salute, ‘Salvete’ and ‘Ave Caesar’.  Names are written on a board in English and Latin. We meet Emperor Nero and his wife Claudia Octavia by dressing up two students accordingly with our costumes.

Children are taught Roman numerals up to 2019, and are challenged to work out some interesting dates, such as 1999 and 1066. A wax tablet is handed round so that everybody gets a chance to write on it with a stylus.

Next comes the pantheon of Roman gods, goddesses and links to planets, days of the week, and so on. We’ll discuss on what makes a civilisation – how does this equate with the barbarity of the gladiators and punishments like crucifixion?

Marcus continues through describing and naming his arms, armour and clothing, handing pieces around for examination and study, and dressing up a strong young ‘puer’ – boy warrior.

There will be offerings to the gods of the artefacts brought by the presenter – oil lamps, mirrors, combs, jewellery, a strigil and olive oil for bathing, samian ware pottery, glass vials, mortarium for grinding corn. The artefacts are passed around, handled and demonstrated with students’ active involvement, and listed on the board, with explanations about everyday Roman life.

We’ll have a quick view of the eruption of Vesuvius and how we know so much from Pompeii (there’s a fabulous five-minute timelapse video clip).

Then BATTLE! Children are equipped with our matching helmets, shields and spears or swords, taught the “sin dex sin” march and proceed into the playground. We allow time for photos to be taken as everyone will want to pose!

Then ‘Romans’ make a testudo of interlocking shields as ‘Celts’ attack, led by Boudicca showing chariot tactics employed by the Eceni (Iceni if you prefer!).

Boudicca appears as a Queen of the Eceni tribe, looking at Iron Age culture and life in a roundhouse, with a wonderful collection of period artefacts; she will explain her battle tactics, and why she is so famous in leading her people to rebel against Roman rule. 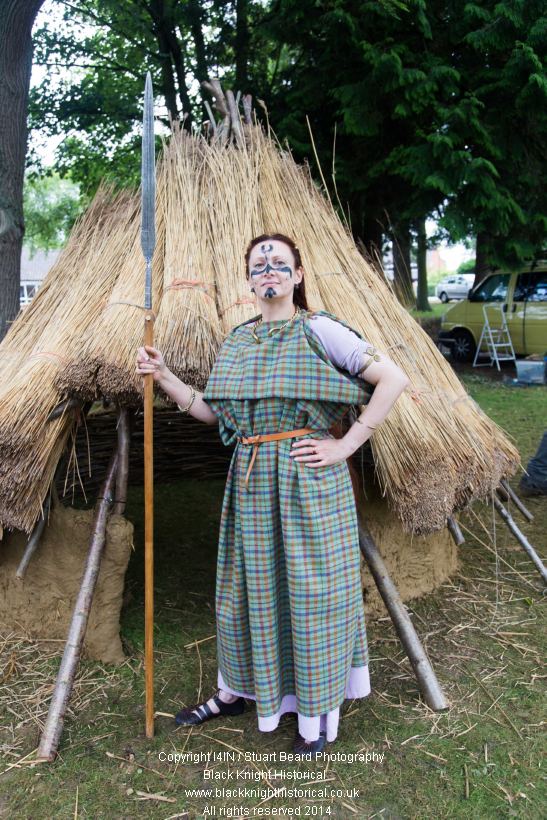