The development of Church, state and society in Britain 1509-1745

Suitable for Key Stage 3, or as a workshop on King Henry VIII, or Queen Elizabeth 1 [Key Stage 1 and 2].

We have delivered many successful educational workshops over the last ten years on the Tudors, and are proud to present our activities for schools. Probably our best workshop!

A typical day brings a royal visit from King Henry VIII and Queen Anne Boleyn, or Catherine Parr, or Queen Elizabeth I (above), as you wish.

For larger schools, sessions may involve more than two costumed educators as you require and budgets allow – up to seven is possible in a day. Students will benefit from a carousel of activities on a variety of topics: music and dance, courtesy and etiquette, life in the Royal Palace, medicine and surgery, falconry and hunting, the contrast between rich and poor, clothing, food, religion, and warfare.

Our selection of objects for role-play,  study and handling is second to none – after lunch we can offer writing with quill and ink, creating pomanders and making Tudor flags, and we can finish off the day with a display of longbow, crossbow and a BANG from a Tudor musket if conditions allow (this entails us changing into lower-class clothing at lunchtime). See the Twitter link below.

Here is our display set up on stage in the lecture theatre in Birkenhead school:

Presented by Queen Elizabeth I and a gentleman adventurer.

Explore the Golden Age of England with Black Knight Historical! 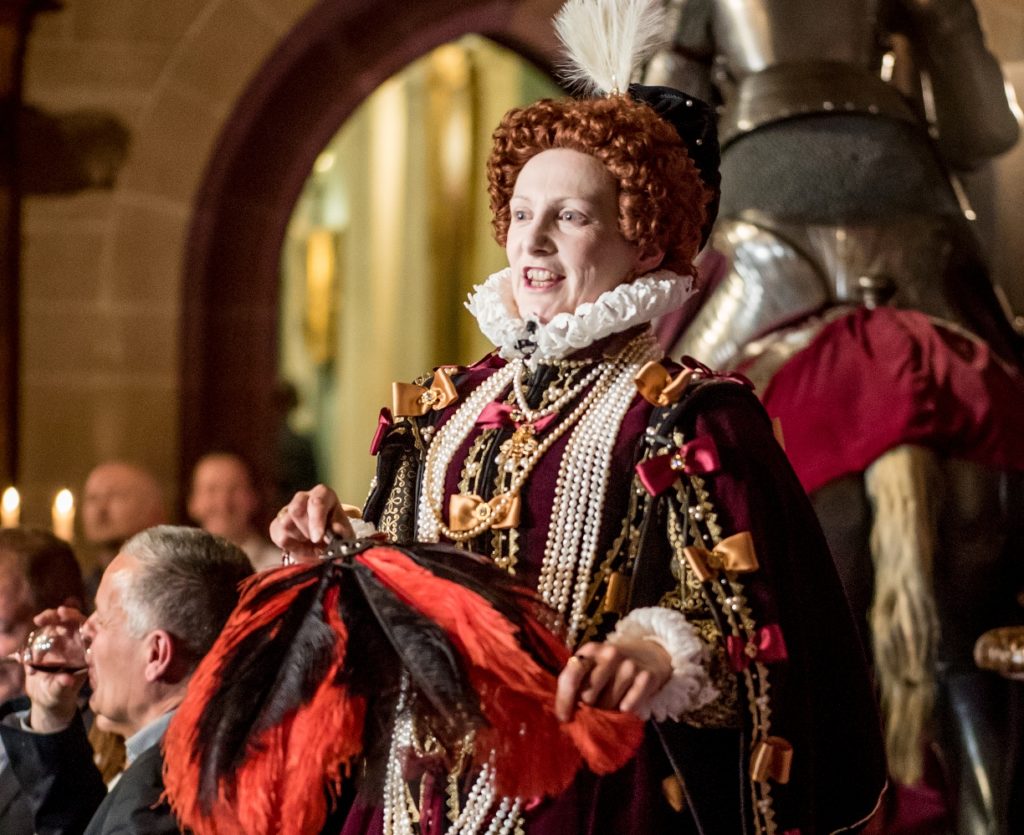 Meet Her Majesty and Sir Francis Drake as we cover topics including the Spanish Armada, the Age of Exploration, the problem of Mary, Queen of Scots, new discoveries, fashion and clothing, establishing the Church of England and the Catholic problem, music and dance.

Understand the legacy of her father, Henry VIII, her brother Edward VI, her sister Mary I, and her mother, Anne Boleyn. And find out why she never had children, and ultimately why she was the last Tudor monarch.

And should your studies wish to focus on something slightly different, here is our interpretation of the classic portrait of Mary, Queen of Scots.

Exploring the 17th Century for KeyStage 3

The reign of the Stuart kings of England makes for a fascinating study day, or we can deliver a full-day workshop on each of the three separate topics.

Remember, remember the fifth of November,
Gunpowder treason and plot,
I know of no reason
Why gunpowder treason
Should ever be forgot.
Guy Fawkes, Guy Fawkes, ’twas his intent
To blow up the King and Parli’ment.
Three-score barrels of powder below
To prove old England’s overthrow;
By God’s providence he was catch’d
With a dark lantern and burning match.
Holla boys, holla boys, let the bells ring.
Holloa boys, holloa boys, God save the King!
And what should we do with him? Burn him!

We are all familiar with Guy Fawkes night on November 5th, but why is it a national day of celebration, some 400 years after the event?  Find out about Guy Fawkes, his beliefs, his fellow conspirators, the details of the plot to blow up Parliament, and what happened afterwards.

A visit to your schoool from Matthew Hopkins, the ‘Witchfinder-General’, and an historical witch, makes for a fascinating and informative day.

The ‘Great Rebellion’ or ‘The War of the Three Kingdoms’

Understand the reasons for the conflict fought between 1642 and 1651.  Learn about ‘Roundheads and Cavaliers’, King Charles I and Oliver Cromwell, equipment and tactics, the great battles, what happened to King Charles and his son, the ‘Rump’ Parliament, the establishment of the Commonwealth of England, the ‘Interregnum’, and finally the Restoration of the Monarchy in 1660. 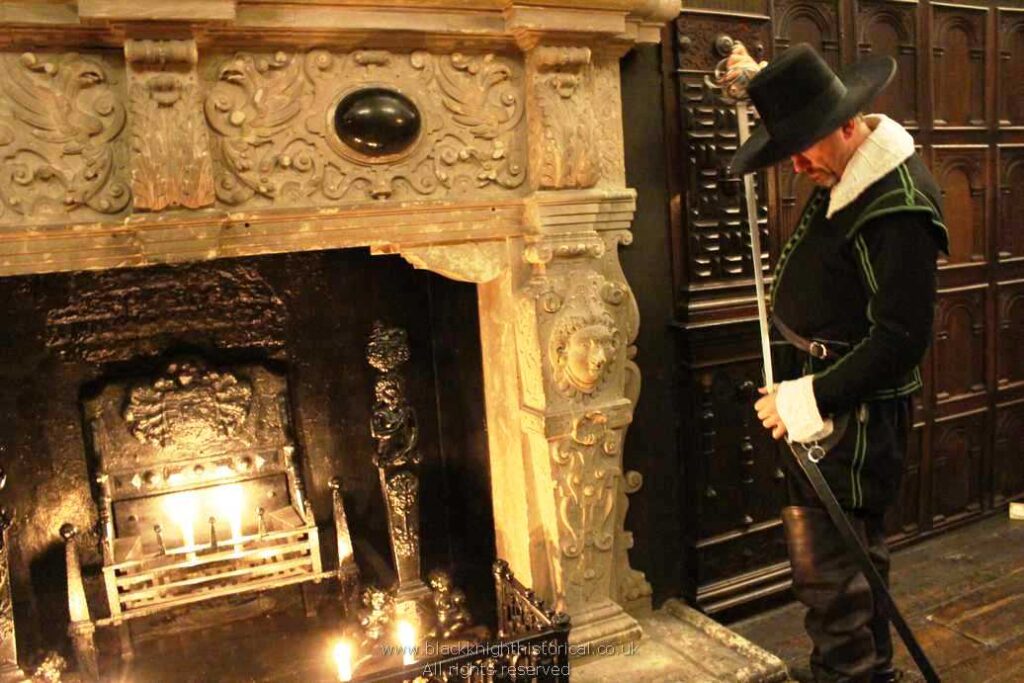 The Georgians and Napoleon

We’ll cover the ‘long’ eighteenth Century, from William and Mary through to George IV, studying military topics such as the War of Independence, the French Canadian conflict, the Napoleonic struggle and the might of Nelson’s navy.

The topics covered will include food and cookery, fashion, health, literature, art, and of course some of the greatest music ever written – by Bach, Handel and Mozart. 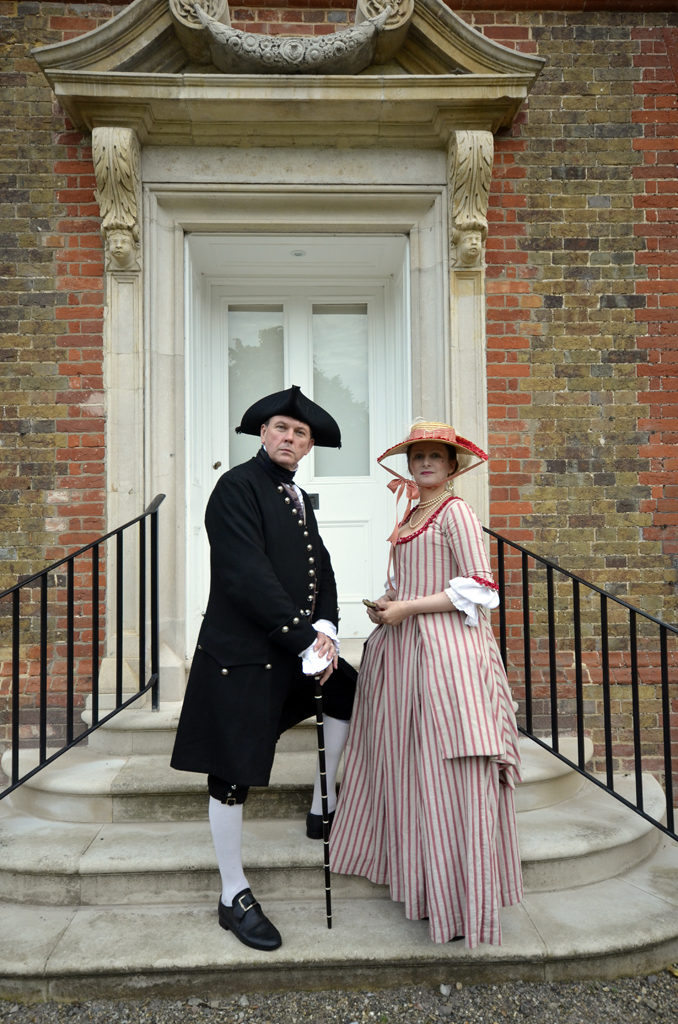 Rule Britannia, Britannia rule the waves! Can be adapted for all KeyStages

Presented by Captain Thomas Masterman Hardy, of HMS Victory, an in-depth look at life aboard a ship of the line during the wars against Napoleon, culminating in victory at the Battle of Trafalgar in 1805, where Lord Nelson was slain.

Captain Masterman will tell you about life aboard his ship with the crew of officers and men, teach you some nautical terms, and regale you with some sailors’ myths and legends. There will be roleplay, and discipline!

Our Victorian workshop is delivered by two of our favourite characters: Miss Housego the schoolmistress, and the doyen of detectives, Mr Sherlock Holmes himself. Ideal for Key Stage 2 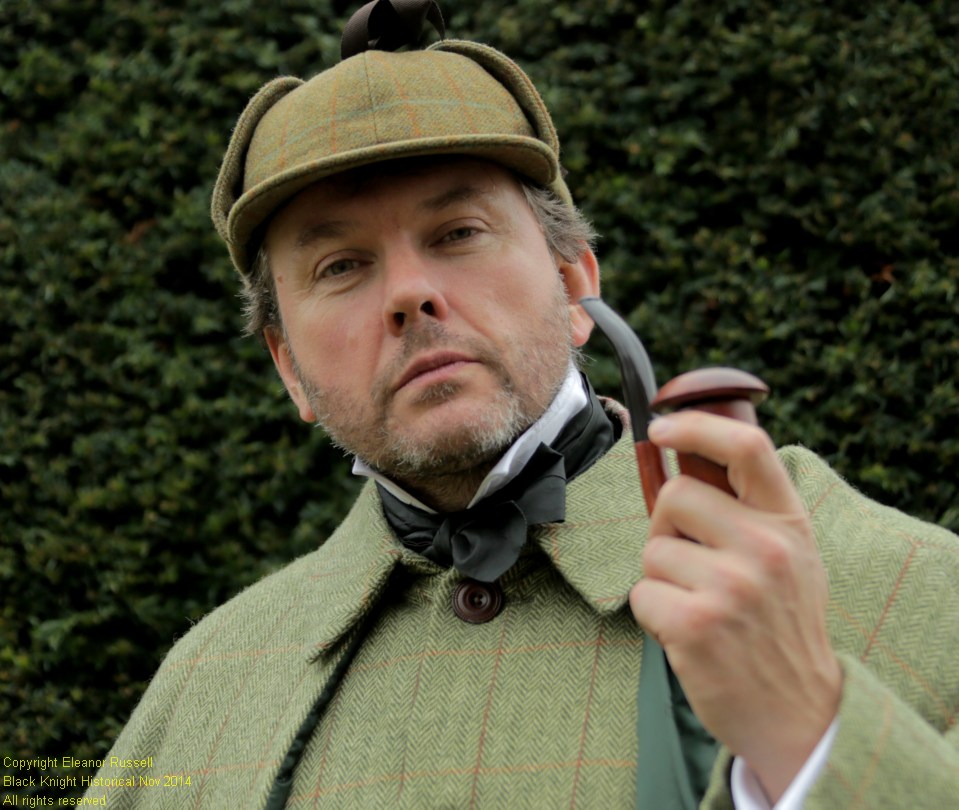 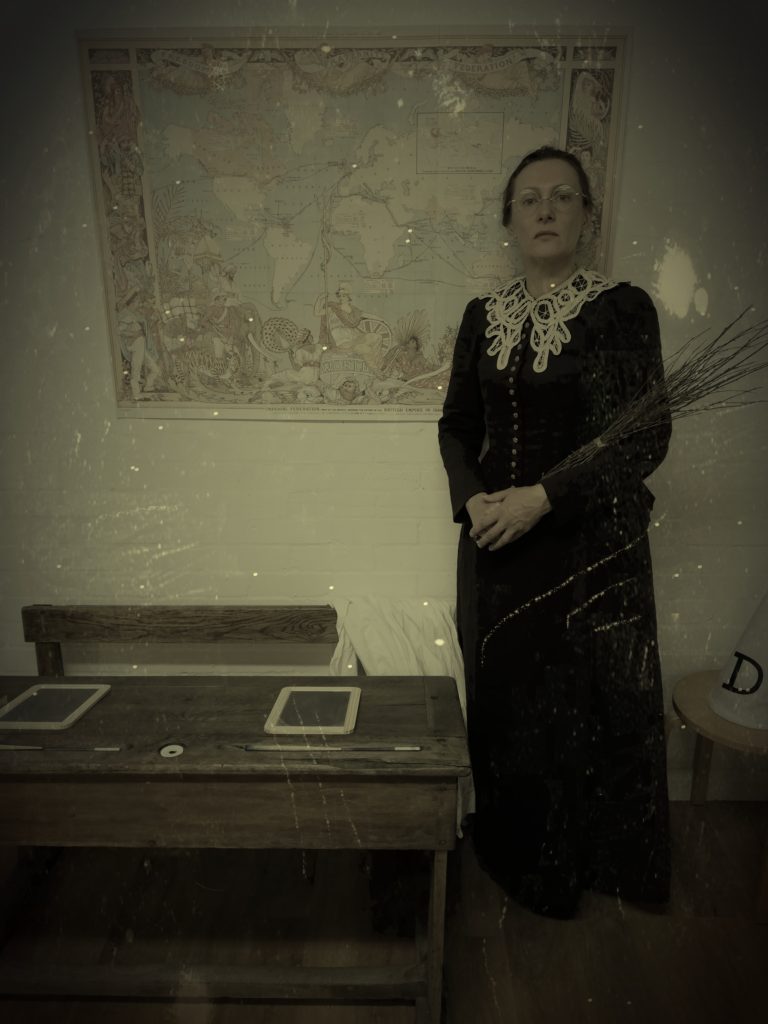 Our recreated school room explores Victorian attitudes to education, and includes a genuine Victorian desk, a world map of the empire, a framed portrait of the Queen, the Union Jack flag, and examples of Victorian clothing.

Your pupils will try out writing on slates or with dip pens, wear the dunce’s cap, see the painful birch and finger stocks, be asked to stand up when the teacher enters the room, experience segregation, learn to sing the national anthem and attempt to learn the the ‘R’s by rote, as was the practice in a Victorian classroom.

Outside we bring domestic service and the workhouse to life, with a Victorian mangle, carpet beating, oakum picking, polishing brassware, making gruel and peeling turnips!

In the other session, Sherlock will lead students on a detective session researching 35 famous Victorians – he will bring 35 clues to their identity, including a genuine period plate camera, a vintage pram, lanterns, an African drum, books, hats, an oar, a stretcher, and many more things.

Some of these characters are household names, others should be more famous than they are, such as Amelia Dyer…

We are proud to present characters from the first world war, including a soldier, a nurse and a pacifist. 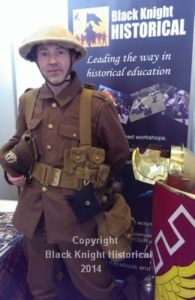 A selection of characters from the 1914–1918 Great War are available to visit you. These include:

Sessions may involve more than one educator,  so that students can benefit from a carousel of activities on a variety of topics – poetry, life in the trenches, medical treatments, life at home, songs and patriotism.

We look at why the war happened, the duration, innovations and the aftermath.

We are proud to present our superb second world war activities for your school.

A typical day will introduce two characters from the period, although we can happily provide more or less as required.  We encourage children to come dressed up in 1940s attire with their gas masks!

If you book two reenactors, children will meet Billy Spicer, an Air Raid Warden, and Molly Stringer – a housewife and member of the Women’s Voluntary Service (WVS]).

As is usual with a Black Knight school workshops, we start the day by surprising all the students in assembly, and outlining the plans for the day.

The day typically unfolds after listening to Prime Minister Neville Chamberlain’s speech of September 1939 on a period wireless set, and identifying the enemy’s flag.  We explore life on the Home Front, the reasons behind the conflict, Hitler’s rise to power, Winston Churchill, identifying friend and foe, medical treatments, life during the Blitz, rationing, Air Raid procedures, technological advancements during the war, and the Final Solution.

All with hundreds of artefacts, roleplay, and mystery object identification. We provide individual background character sheets for every student for exploration of various second World War topics – over 30 unique character cards, all different, with 1930s names and a WW2 detective game.

We end the day with our very special ‘Home Guard Training Course’ as seen below. A truly memorable day!